skip to main | skip to sidebar

GRANDSONS AT WOLF TRAP and a NEW DIGITAL EP
The 'Sons be back at Wolf Trap for their annual day-after-Thanksgiving shindig on Friday November 23, with special guests JON CARROLL, MOE NELSON, and DEREK HUSTON. Concert-goers will receive a free download card for our new digital 'single': "Sock Drawer Millionaire" b/w "Baltimore". 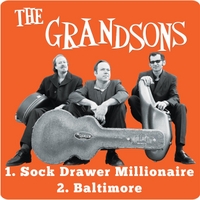 (If you can't wait, the songs are available on CD Baby, iTunes, and all major download sites.)
Posted by Whirling House at 8:24 PM No comments:

Having spent some of his childhood in St. Thomas and have long made Calypsonian tunes part of their sets, the lead singer from the Grandsons takes some good friends down a road less traveled... to the islands! Aided and abetted by Daniel Schwarz (known from the Bandhouse Gigs), John Young (from the Grandsons and Spottiswoode & his Enemies), Sir Alan and his Ponzi Schemers run through classic songs from paradise.

While the songs are melodious, there is an underlying twinge of hardship and longing that comes through and provides a certain authenticity not found in your buffett or beach musics. But never fear, fellow Grandson Chris Watling brings his baritone sax along to keep the festivities festive.
Posted by Whirling House at 8:32 PM No comments:

Brand New Single from Bombpop: "The Way It Feels" 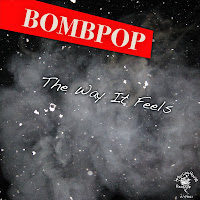 Bombpop releases a corker of a song - "The Way It Feels". Hear the fireworks.

Eric, Maynard and Tom cranked this out one evening at PMD in Charlottesville.
Matt Brown did the cool artwork.
That picture isn't the Milky Way - it's a Virginia snowstorm!

Support the arts at CDBaby, iTunes or Amazon.
Posted by Whirling House at 3:11 PM No comments:

Vivian, our super cool lead singer (also a hip mom and video auteur) has made a bubbly, dreamy, sultry, floaty music video for our version of  Wilco's Radio Cure.  This probably violates some kind of copyright but check it out here anyways. Cheer up, honey! 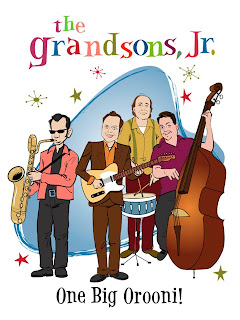 The long awaited Grandsons, Jr record, One Big Orooni, is out and it actually comes with a coloring book!! For a band who has been bringing eclectic to new heights for years, the use of Slim Gaillard's slyly swinging tuneage for a kids record is a match made in heaven...one you can find right here on earth! Vout!

Check this promo spot out:


One Big Orooni from vivian kao on Vimeo.

Posted by Whirling House at 8:13 PM No comments: 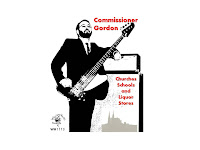 A well respected bass player around town, Commissioner Gordon (yes, he actually served as a commissioner!) gets to display his full talents on "Churches, Schools, and Liquor Stores" - songwriter, singer, screamer, mandolinist and guitarist.
Don't be fooled if the opening drumbeat reminds you of Toni Basil's "Mickey", for soon the Commissioner's big scream kicks off the psychotica gadda vida riff that is "Crypobiotic" - a paean to the living earth that supports desert fauna and for some reason reminds him of a "girl who's like no other - she's Cryptobiotic!"
"Out of Town Romance" will make you longingly look back at those days when you dated someone who wasn't just across town - they were across the state, across the country or across the ocean. There are some fat horns and a honking tenor sax solo laid down by Chris Watling of the Grandsons.
"Mr. Good Enough" should make all the ladies swoon with being understood, even though it's telling them all to lower their expectations..."he may not be Mr. Right, but he'll be your Mr. Good Enough". Take heed, girls! And Buddy Holly fans - take note of the drum (singular)!
"Evil Clowns" is the song for everyone who has a fear of clowns...rightfully so in some cases. We know some good clowns, but it seems like the Commissioner's nightmares are filled them - "No one sleeps when they're in town!"
"Somebody Else" is a song for the sad sacks who think they're never ever gonna get that girl...but they do. The Commish did! The drumming throughout this EP is great but Todd Vestibule's drumwork on this one is stellar and hypnotic when in isolation.
"Jeremy Bentham" is a song about English philosopher Jeremy Bentham. Tell you what, if you want your life's work to be remembered 200 years from now, why don't you just set up your skeleton in the hallways of a local university! "I saw the King, and the Acid Queen, but best of all, I saw Jeremy."
"Just Like Venus" just might be the best lyric amongst a host of great lyrics. "I saw my friend Milo just the other day..." And hey, if you're not a words person, this rockin' number gets up and goes.
"I Had to Tell You" is a heartfelt cover of Roky Erickson and the 13th Floor Elevators. The guitar and mandolin reveal the bluegrass side of the Commish.
The bonus live version of "Jeremy Bentham" was recorded at the Live Arts Fest in Charlottesville with Bombpop.
Musicians aiding and abetting are Todd Vestibule (d), Baby Doc Martens (b), Jamie Orchard-Hays (g), Ergle Flumg (g), Mr. Chia Chen Lee (g), Maynard Sipe (g, d), Chris Watling on tenor and baritone sax.
It was recorded at Bebop Studios in Rockville, MD, Recording Arts in Fairfax, VA, PMD Recordings in Charlottesville, VA, Corner Canyon Studios in Draper, UT, and Jabb's in Long Beach, CA.
Posted by Whirling House at 9:05 PM No comments: 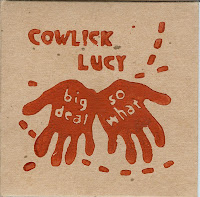 It's happened - we got our act together and Cowlick Lucy's awesome roots rock/slowcore record is available for download on iTunes, CDBaby or Amazon MP3 Downloads. Check it out!
Posted by Whirling House at 10:52 PM No comments:

Contribute to the Arts (aka Buy Stuff)